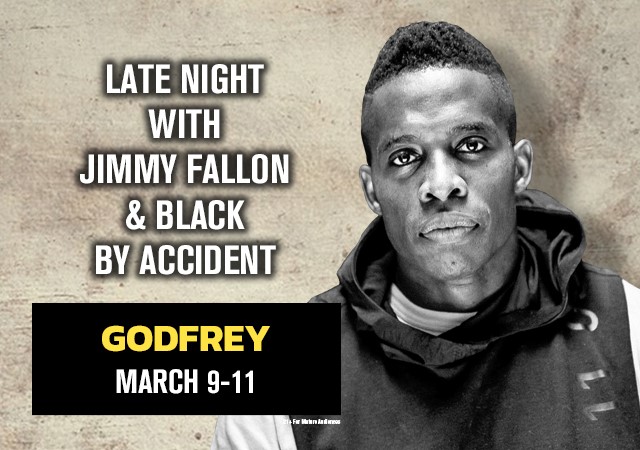 GODFREY is one of the hottest comedians on the circuit. Growing up in Chicago, he constantly got in trouble for misbehaving and being an all-around class clown. Godfrey’s Nigerian parents unknowingly encouraged his bad behavior by showing him classic comedy films from an early age. While performing impressions of his college football teammates, Godfrey realized his irreverent style of comedy might be more than just a hobby.

As soon as Godfrey went pro, he immediately landed several high profile projects. Ben Stiller cast him to play himself in “Zoolander,” a performance that has since achieved cult status. Godfrey’s more recent film roles in “Johnson Family Vacation,” “The Cook Out” with Queen Latifah, “Phat Girlz” starring Monique, and “Soul Plane,” alongside Snoop Dogg. Godfrey is perhaps best known for his stint as the “7UP Guy” in the beloved 7UP national campaign.

Godfrey has also made many television appearances including performing on “Late Night with Jimmy Fallon” and recently starred in his own one-hour special for Comedy Central, "Godfrey: Black By Accident." Godfrey recently recurred on FX's “Louie” and also played the lead in a pilot for that network called “Bronx Warrants.” He developed an animated pilot for FOX that was based on his comedy act, and can regularly be seen on “Shaquille O’Neal’s Upload” on TruTV.

In addition to his film and television work, Godfrey is one of the hottest comedians on the road today. His one-man show, The Godfrey Complex, was a major hit at the Just For Laughs festival in Montreal. GQ Magazine said that Godfrey "is set to be one of the biggest performers in the US in 12 months," following his run at the festival. Godfrey can be seen hosting and headlining some of the most prominent comedy clubs across both coasts including: The Comedy Cellar, the Comic Strip, Caroline's Comedy Club; and The Laugh Factory and The Improv in Los Angeles. **ASSISTIVE LISTENING AVAILABLE; INQUIRE AT FRONT DESK**