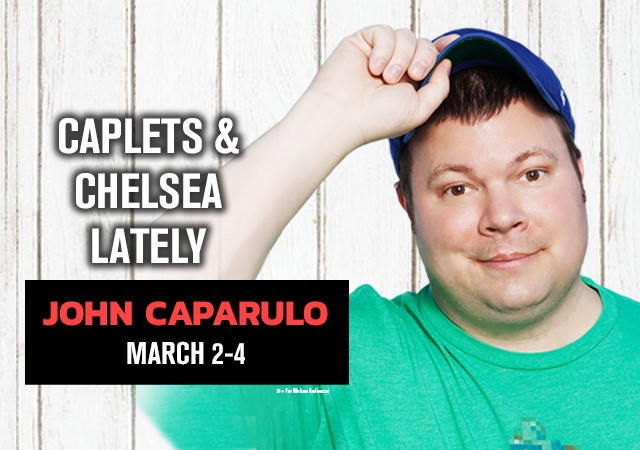 JOHN CAPARULO has been making audiences laugh for over 20 years. Cap always knew he was destined to be a comedian, and so in 1999 he left Ohio and moved to Los Angeles where he got a job working the door at The World Famous Comedy Store. After nearly 4 years of struggling for stage time, cutting grass at a local golf course and rethinking life choices, he started catching a few breaks.

Cap was invited to the 2003 Just For Laughs Festival in Montreal and shortly thereafter was featured on the “Blue Collar Comedy Tour: The Next Generation”.  Over the next several years he would make multiple appearances on “The Tonight Show with Jay Leno”. Cap found mainstream success when he appeared over 150 times as a panelist on Chelsea Handler’s popular E! show, “Chelsea Lately,” during its 7-year run.

Cap has two comedy specials: “John Caparulo: Meet Cap,” which premiered on Comedy Central in 2008 and “John Caparulo: Come Inside Me,” which launched on Netflix in 2013. Cap currently releases “Caplets”, a brand-new set of comedy every 30 days that were distributed on Hulu, JohnCaparulo.com, and YouTube. Cap now tours the country performing at theaters and comedy clubs. When not performing Cap lives in Las Vegas with his wife and daughter and a houseful of pets. **ASSISTIVE LISTENING AVAILABLE; INQUIRE AT FRONT DESK**