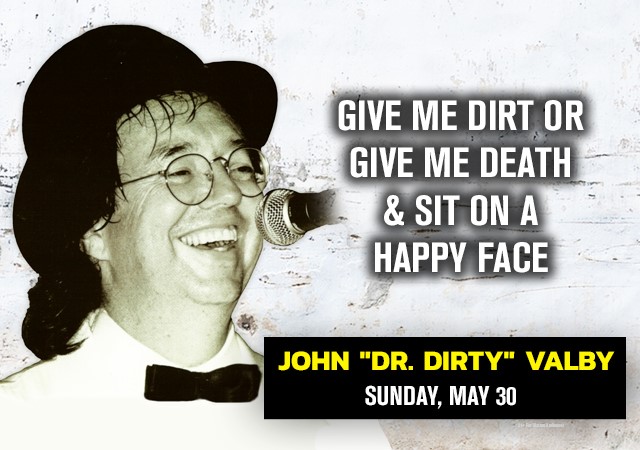 After spending an evening with John Valby audiences find themselves wanting more and more of him. What makes Valby so unique and entertaining is his uncommon rapport with the audience and his ability to mix his musical talent with a mad-cap variety of "Dirty Ditties." Few people can resist laughing at songs that would have earned them a mouthful of soap when they were children. Valby's repertoire is composed of popular songs, limericks, classical arrangements and his own original creations. Valby has made a career out of poking fun at his audiences, stretching the limits of free speech and accepted good taste and satirizing current events from behind the piano.

Mr. Valby used to get annoyed that while he was on stage baring his soul to the audience, the crowds would yell "sing more dirt" and he did. His manager named him "Dr. Dirty" and the rest is history. Mr. Valby wears a white tuxedo, derby and black bow tie, while supporting the grin of a leprechaun. He sings a slew of dirty songs, complete with fraternity references to genitals & intercourse. Nothing and no one is sacred around Dr.Dirty, but he accomplishes his act with ease and finesse. Few entertainers have such a one-to-one relationship with their audience. He doesn't target one group in particular. He smiles with them, laughs with them, jokes with them and makes everyone laugh at themselves.