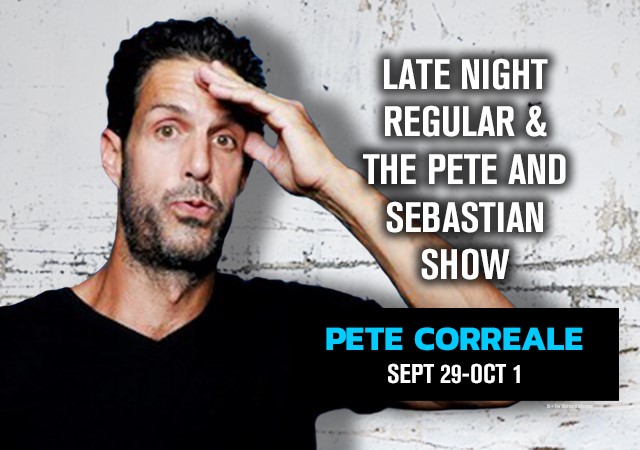 PETE CORREALE is a professional stand-up comedian originally from New York.  His comedy is reflective of his life and the experiences he’s been through. Being married for almost twenty years and having a young daughter, Pete’s never at a loss for material. With a conversational delivery and disarming regular New York guy attitude, Pete makes you feel like you’re listening to the funniest guy at a party as opposed to just another comedian on a stage; combined with top notch writing skills, this has led Pete to the top of the stand-up profession.

Pete has performed numerous times on The Tonight Show, Letterman and Conan. As well as filming two of his own one-hour television comedy specials. The first special - The Things We Do For Love aired on Comedy Central and was voted by Time Out Magazine as the #2 Comedy special of 2008. His second one-hour special debuted on Showtime in 2016, this one titled Let Me Tell Ya. It was filmed at the famous Vic theatre in Chicago, and Pete once again delivered a stellar performance. Pete has also released two comedy albums, Give It A Rest in 2010, and his second album Made For Radio which was released in June 2018 and quickly rose to number one on the iTunes comedy charts.